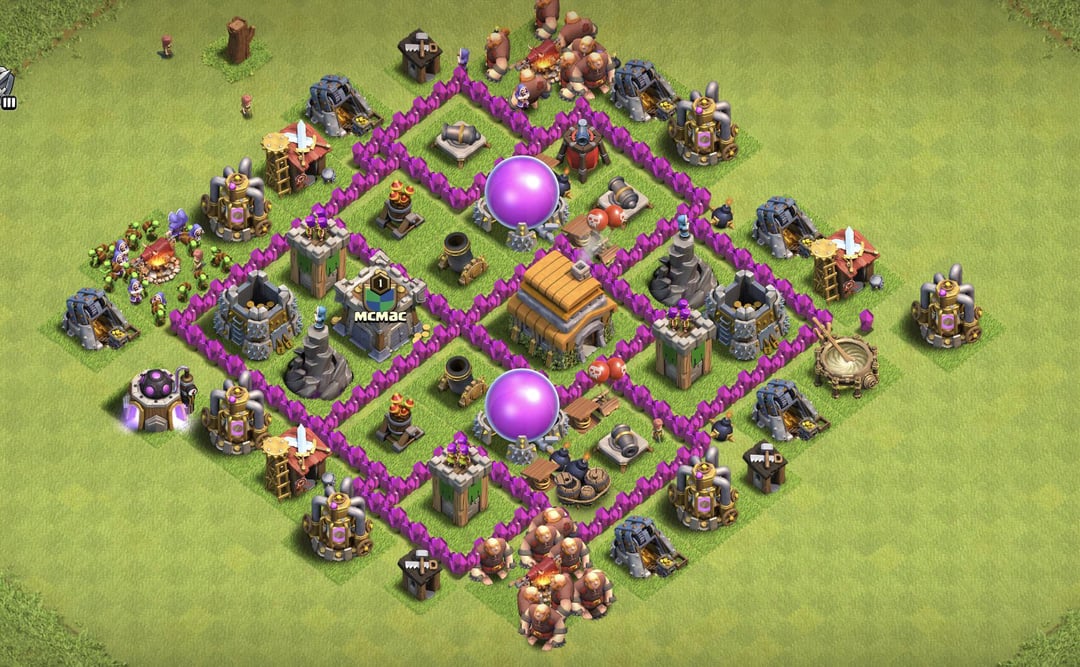 Air defense: requires air bombs to lv 6 and normal air defense to lv 7= it puts bombs instead of rockets, and decreases range to 7 tiles and attack speed reduced to 1.5 secs, but gains big splash damage ( 1.5 tiles)
This would really counter big hordes of balloons while decreasing in performance against tanks like the e dragon and the lava hound.

Wizard tower: requires Lv 9 wizard tower and lv 5 ice wizard tower= the wizards becomes an ice wizard and gains smaller splash damage ( 1 tile – 0.5 tiles ), as well as 15% less damage at all levels, but now freezes enemies that get hit.
This would decrease effectiveness against big swarms of barbs or archers but would counter high housing space troops and heroes.

Hidden Tesla: requires lv 7 mega Tesla and lv 10 regular Tesla = highly decreases attack speed ( 0.6 secs – 2.5 secs ), but gains chain damage that can hit up to 3/4 targets.
( these are all the original defenses that were present from the global launch)

New trap: ( th 9 )
Log trap. When activated it releases a log that pushes back any troop on its path and deals damage to them.
Dmg at lv 1: 200
Dmg at lv 5: 300
Activation range: 10 tiles
Log width: 4 tiles
Targets: ground
Range: 10 tiles
Damage type: area splash ( 4 tiles )
Pushback: farthest reach of the log ( 10 tiles ). This means that if they are near the edge if the activation range Tripp’s won’t be dragged far, but if they are near the trap position itself they will be dragged way more.

New siege machine at th 13:
Catapult
It throws any unit that goes on it forward a few tiles , so if you place it near a wall it will throw them over walls, and before placing it you can set the distance it will throw troops.
( when there are no buildings outside the walls left, troop AI will consider it like a jump spell)

At lv 3:
Hp: 4500
Maximum throw range: 10 tiles
Optional: maximum capacity: 80
Before dying it will also throw CC troops.
( It will continues to throw troops until it is destroyed, or after it has thrown a certain amount of housing space, I am not sure )

New troop ( th 13 )
The sorcerer
He is a troop with high damage and low hp.
His main attack can hit multiple buildings and he has magical damaging orbs that levitate around him.
Upon death he will cast a random spell, which level depends on what you have researched on lab.
He hits the targeted building and 2 other rays come from the side of him, like this: ( though they would start from his body not from the side )
——— other building
S: ——— targeted building
——— other building

Super balloon
It is a bigger balloon that is dark black, and has 2 skeletons on rather than 1
Special ability: grapple
Its main attack will split in 3 smaller bombs that deal half of the damage, and go in a triangular shape around the place where the normal bomb landed.
Requires lv 8 balloon

Troop skins: I think that this is 100% coming especially because the champion king skin has custom barbs from his ability. I think we could have a golden dragon skin after we defeat the boss in dragon’s lair and we get it by getting the achievement.
It would gain flaming eyes at lv 4 and a flaming tail at lv 7 , just like regular dragons upgrade look.

[ASK]how would you recover this trash base?

It is meme [MISC]

Repeat it after me [humor]